Trouble In Bear-adise: The Perils Of The Matt Nagy Era Of Bears Football 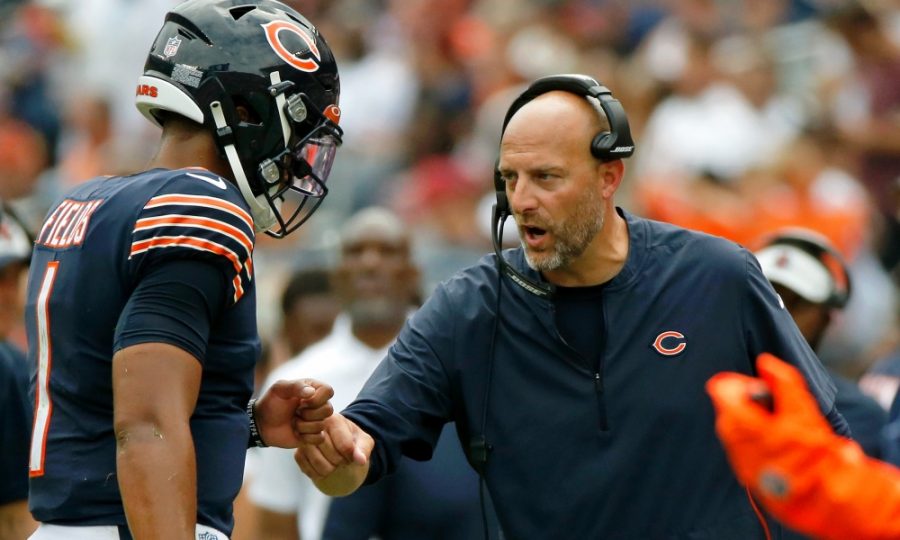 The Chicago Bears are currently 3-2 on the year thus far, coming off of a big win in Las Vegas against quarterback Derek Carr. With problems plaguing the defense early on, shutting down the offense of Darren Waller, Hunter Renfrow, and Josh Jacobs to only 9 points was an impressive bounce-back performance.

However, the Bears’ struggles have always come in the form of offensive woes, as head coach Matt Nagy prides himself on his offensive genius despite absolute failure on that side of the ball for his entire tenure. When Mitch Trubisky was the head of the offensive unit, fans blamed him for the team’s lack of production. Nick Foles, Andy Dalton, and Justin Fields have all had turns in command, and yet the offense has still struggled mightily.

This season, an outright embarrassment of the offense in Cleveland has been the lowlight of the Bears season thus far, as Nagy insisted on playing Myles Garrett (arguably the best edge rusher in the entire NFL) one-on-one on passing plays and refusing to give Justin Fields any extra blockers in the backfield (such as running backs). Thus, Fields’s first ever NFL start ended in a pitiful performance of only 47 total yards all game.

Despite hosting an offense consisting of David Montgomery (albeit he is hurt at this time), Darnell Mooney, and Allen Robinson to complement Justin Fields, Nagy’s insistence on running seemingly the same plays every game, such as blatantly obvious runs up the gut and wide receiver screens that go nowhere, hinders the offensive attack at every turn.

Rewinding the clock back to 2018, Nagy actually won the NFL Coach of the Year Award for leading the Bears to the division title and a playoff berth against the Eagles. However, the defense generated some of the best stats across the board in the entire league, most importantly takeaways, with a gargantuan 36 turnovers produced, five more than the next team. This reliance on defense was exposed when defensive coordinator Vic Fangio left to accept a head coaching gig in Denver. The Bears then failed to make the playoffs in 2019, followed by barely squeaking into them in 2020, only to get obliterated on Nickelodeon by the Saints.

When one of the best defenses in the league experienced slight regression from 2018 after Fangio’s departure, Nagy’s team no longer had success because now the defense couldn’t always bail out the bad play calling on the offensive side of the ball. Overall, this is still true right now in 2021, as while the Bears are doing better than they had against Cleveland, they are yet to score above 24 points this season, while other teams routinely put up scores in the 30s and 40s.

Will the Bears make the playoffs this year? There is an honest chance that they will, despite the grueling schedule up ahead. If they can beat teams in playoff contention like Las Vegas, then perhaps the defense can stop the better offenses in the league and keep the Bears in the game. Despite poor play calling, the offense still has star talent on it, which can make the difference in overcoming adversity imposed upon them by their own coaching staff. Generally speaking, even though this season has potential to be a success, Matt Nagy must either radically change or face even more scrutiny and perhaps even a pink slip after the season ends in yet another failure.