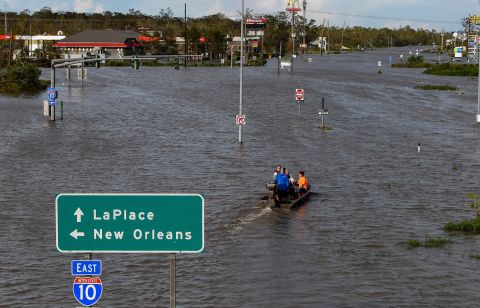 Sixteen years ago, New Orleans was ravaged by Hurricane Katrina. A few weeks ago, another storm, Hurricane Ida, made landfall and wreaked havoc on this city that previously had inadequate levee protection, poor federal response, and drastic flooding.

The famed meteorologist Jim Cantore, most known for his incredible reaction to experiencing ‘thunder snow’ for the first time, donned a baseball helmet while standing next to an overturned dumpster adjacent to the New Orleans Marriott hotel on Canal Street. The Weather Channel cameras showed him going into the street, surrounded by no one, and experiencing the Category 4 winds for himself. The experienced reporter struggled to keep his footing, despite covering many hurricanes before. No matter what, Ida was going to impact lives significantly.

The mayor of New Orleans declared a shelter-in-place order for those who did not evacuate before the storm reached Louisiana. The local energy provider, Entergy New Orleans, said that the entire city lost power due to the hurricane; most of the Southeastern power grid was devastated by the storm. There were tornado warnings all the way through  Pensacola, Florida and Dauphin Island, Alabama, and ripped off roofs across the Gulf of Mexico. The southeastern United States has been utterly destroyed by this chaotic storm.

Even in Baton Rouge, Louisiana State University closed for the storm. The New Orleans Saints outright cancelled their preseason football game against the Arizona Cardinals due to the storm. The city basically shut down, boarded up, and hoped for the best within the shelter of their homes, many of which suffered severe damage.

The full extent of the storm isn’t fully understood yet, but based on its characteristics, it will be giving the infamous Katrina a run for its money. While Katrina started as a Category 5 storm and Ida was a Category 4 at its peak, Katrina was only a Category 3 when it hit land. However, Ida sustained its Category 4 label while hitting land, which explains the potential for it to be even worse. Because the levee system has been improved since 2005, though, Ida’s flooding could be less severe.