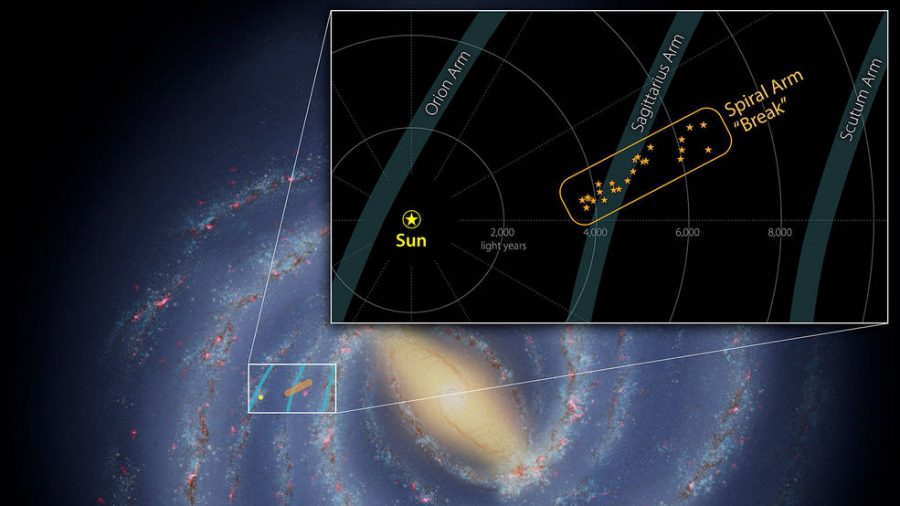 Prior to its retirement in January of 2020, NASA used its Spitzer Space Telescope to examine the Sagittarius Arm of the Milky Way.

In past years, scientists have discovered what used to be an unknown feature within our galaxy. This peculiar phenomenon is a group of young and forming stars that are sticking out from the Sagittarius Arm of the Milky Way. According to NASA, this major structure spans 3,000 light-years, making it officially “the first major structure identified with an orientation so dramatically different than the arm’s.”

Michael Kuhn, an astrophysicist at Caltech, noted that “a key property of spiral arms is how tightly they wind around a galaxy.” The tightness of an arm’s wind is determined by the pitch, which increases from the basal 0 degree pitch of a circle as the spiral becomes more and more open. On average, it is understood by scientists that the spiral of the Milky Way’s Sagittarius Arm has a pitch at approximately 12 degrees. In contrast, the breakage in the Sagittarius Arm in which the contingence of young stars is forming has a pitch of around 60 degrees. This sharp increase in the pitch shows how vastly different this angle break is within the arm, thus revealing why it is of such importance and intrigue. Within such a close spiral formation, the existence of a break jutting out may hold a clue to understanding our galaxy and the possible structures that it holds.

This drastic formation contains nebulae that contained some of the first stars measured in 1950 and led to the inference of the spiral structure’s existence. These include the Eagle (containing the Pillars of Creation), Omega, Trifid, and Lagoon Nebulae. Despite the measurements being taken close to a century ago, it has only been the advanced measurement structures from the Gaia spacecraft that have allowed scientists to observe the apparent distortion of this new structure. Contrasting the 1950 study, the more recent one involving Spitzer was able to catalog newborn stars and thus, alongside the data gathered from Gaia, shows us a three-dimensional map of the complexity and diversity within the Sagittarius Arm.

In the end, we still do not fully understand much about this small fragment of the Milky Way, much less the entirety of the galaxy. However, research such as this allows us to have an understanding of the bigger picture within our reach.