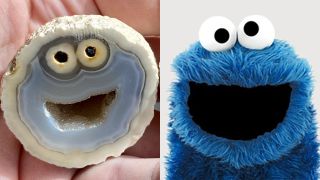 Nature is a source of beauty seen from waterfalls, to flower fields, to snow-covered trees. It’s intriguing, stunning, and in some cases, resembles a character from Sesame Street. Mike Bowers, a mineral collector from California, purchased an agate from Lucas Fassari, a Brazilian gemologist, that when cracked open, resembled Cookie Monster. Soledade, Brazil is an area full of impressive stones, but will likely become more well known because of this one.

To fully appreciate this delightful occurrence, it is important to learn what an agate is. The process and what an agate is is described by Live Science as “a form of quartz that develop[s] within cavities in volcanic rock. The cavities are formed by gas bubbles in hot lava. Over time, as the lava cools, water infused with silicon dioxide percolates through the cavities. As the water evaporates, the silicon dioxide is left behind on the cavity walls, creating colorful layers of crystals. The colors are caused by chemical impurities in the silicon dioxide and by the spacing of the crystals.”

Through this process, it is very unlikely that any sort of face would take shape. However, this Cookie Monster shaped agate proves to be as rare as it is entertaining because it does just that. This gemstone is unique not only because of the character, but how the character was made. The spaces that make the eyes and mouth are perfectly positioned by chance as they are formed when agates do not completely fill the volcanic cavities, as Live Science describes. The fact that the face is present on both sides of the stone is special as well, says Mike Bowers, because it is rare for a mirror image to appear as a result of having the voids lined up.

All in all, this rare rock is a pleasant piece of news and another reminder of how nature is beautiful and unique. Bowers has decided to keep the rock for now, as he told Life Science, but it may one day end up in a museum or in the hands of another collector. Wherever the stone may end up, it will always be an entertaining piece to look at and appreciate.