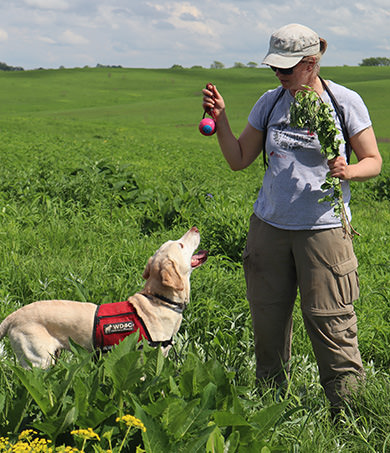 Dogs have been helping humans for generations by using their nose and brainpower to detect weapons, disease, and even track dangers to animals such as poachers. Now, their expertise is being applied to the environment. As shared in an article by National Geographic, dogs are now being trained to sniff out invasive species and track endangered ones.

Dogs that are trained in this program, Working Dogs for Conservation (WD4C), are the energetic ones in shelters that usually are picked by families as puppies, and then grow to be too spritely for them to handle. The organization seeks out these dogs because they can train them to put that energy to good use. Tracking these species makes for long days and focused work, but the dogs selected and trained are up for the challenge and experts at what they do. Through experience, it has been discovered that there is not much dogs cannot sniff out.

One invasive species these dogs have been trained to discover are zebra mussels, which have done damage to the Great Lakes and need to be prevented from entering other waters. Conservation K9, a program created by Cindy Sawchuk, positions dogs at check stations so that when boats arrive, they can be investigated for any zebra mussels attached to them. These talented animals can sniff 2 veligers (size of the mussel larvae smaller than a single-celled amoeba) out of 12 liters of water as National Geographic reports.

In Willamette Valley in Oregon, Kincaid’s lupine is an endangered flower, and not only that but the endangered Fender’s blue butterfly depends on it. David Vesley, wildlife consultant at Oregon Wildlife Institute, decided that rather than have a person attempt to determine the endangered lupine from other types of lupine with a magnifying glass to find where the endangered lupine was most common, he would bring the issue to the attention of WD4C. Dogs were trained to track the scent of Kincaid’s lupine and over the course of the plant’s life cycle throughout the year, they were able to successfully locate 30 sites with a strong population of the flowers. Now, protection has been placed for these areas and the dogs doing the detective work brought attention to the issue of these endangered species.

Another example is the tracking of San Joaquin kit foxes, an endangered species living in Central California, when a solar panel field was to be placed in the little habitat they had left. They needed to know how the foxes would respond and so during the construction of these panels, dogs tracked the foxes by finding their dung and over the 8-year study, the number of foxes was found to be increasing despite the panels being added. The panels actually provided shade which allowed grasses to grow under them and gave the foxes new animals to hunt.

Dogs are not only great companions for everyday life, but they are amazing protectors of our world. It is unknown how many other species dogs will be able to sniff out, but they have already made such a difference in the preservation of plants and animals alike that they are bound to be successful in the future.