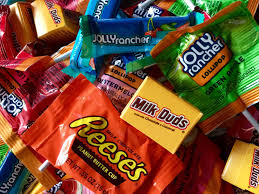 Many holidays have gone haywire this year due to the current pandemic. However, pumpkins, skeletons, and ghosts can still be seen decorating houses around the area, which means that Halloween spirit is in full swing. Plans for trick-or-treating may have been altered or canceled meaning that participation in Halloween this year will be different from any other- so what does that mean for the candy?

Whether they are buying for trick-or-treaters or their own personal enjoyment, consumers are purchasing more treats and the Halloween candy sales have doubled this year, according to Food Business News. With Halloween candy sales making around $ 4.6 billion 8 weeks before Halloween night, as explained by the National Confectioners Association, the candy sales are very important to the industry.

The increase in sales despite the pandemic are encouraging for candy makers. Halloween candy has surpassed last year’s sales by 25% with 17% more being sold in grocery stores alone, Food Business News reports. As Michele G. Buck, chairman, president, and CEO of Hershey’s Co. explained, the candy sales are 50% “ ‘treat for me’ or candy bowl” purchases and 50% is purchased for trick-or-treaters “with sales concentrated in the last two weeks of October”. Based on this pattern, the increase in sales so far has resulted from consumer’s sweet tooth.

With trick-or-treating safety levels being debated this year, homeowners are unsure of how much candy to purchase, if any, which can endanger the sales two weeks prior to Halloween. As reported by the Huffington Post, candy companies are preparing by adjusting their bag sizes. Mars is creating a bag size based on the area where the items are to be sold because of the varying trick-or-treating patterns. There will be smaller bags for areas discouraging trick-or-treating and regular or larger bags for areas where the Halloween tradition is as popular as ever. Hershey’s is not selling as many Halloween themed bags of candy so that after the holiday, the bags will still be purchased.

Additionally, stores are limiting the amount of candy they are taking in this year. As the Huffington Post shared, CVS is “reduc[ing] the number of large and giant bags of candy” their stores will get and instead the company has “expanded its assortment of “instant consumable” sized candy and gum that parents can pick up to treat themselves”. Target has “cut back its assortment of Halloween candy in anticipation of a reduction in trick-or-treating this year”. However, online candy sales may be able to replace sales lost from actual stores. Easter brought an increase in online candy sales so it is likely that Halloween will display the same trend. So whether or not trick-or-treating is going on in your neighborhood, there are still sweets available to supply some spooky delights.