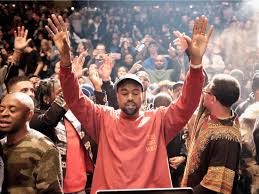 In this past year, platinum recording artist Kanye West “found God”. Coming off his sequent album “Life of Pablo”, an album based on the ideals of the infamous drug dealer. In between these two albums, Kanye began worshipping Jesus. The origin story began when Kanye was in the hospital after having a manic episode, psychosis, and sleep deprivation. Whilst in the hospital Kanye began reading the bible as means of passing time. During that time, Kanye began to have found an understanding of the gospel. Since then, Kanye has done nothing but spread religious ideals. The first way he has done this is by releasing his studio album “Jesus Is King”. In this project, Kanye illustrates how he is a son of Jesus and that his reformation is progressing. A second way he has done this is by having services every Sunday, usually, these services are held in Calabasas at his home. These services are a companied by a large church choir and a variety of instruments that were used on Kanye’s album. Kanye always has special guests come out to perform, this meant charge fees had to established. The entrance fee for Kanye’s services is from 100 to 200 dollars. Usually, these tickets are bought up immediately. Regardless Kanye is bringing a change to the rap industry that we have yet to see, and I for one am here for it.