“Who Are You Wearing?”: The Truth Behind Award Show Dresses 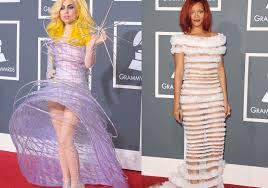 The start of award show season has officially begun- starting with the Golden Globes at the beginning of the month and the Grammys this previous weekend. However, no award show is complete without celebrities strutting down the carpets in their over-the-top designer clothing. However, many viewers do not know the stories behind the frilled, feathered, and cropped dresses suits.

The truth is, many celebs do not get a say in what they wear. Many designer brands (such as Louis Vuttion, Gucci, and Calvin Klein) pay celebs to wear their new designs, and is often seen as a competition among brands. Celebs who do get say, however, compete with others in order to get sponsorships/designs from brands. For example, if Jennifer Aniston wants to wear a Chanel design, but is already sponsoring Kim Kardashian, a new level of celeb drama breaks out. Finally, all drama aside, the true meaning behind the crazy outfits is making a statement. Whether it be self-confidence or supporting a cause, many dresses have a backstory that will hopefully inspire viewers.

Instead of asking “who are you wearing?” this award show season, take advantage of the truth and find the true meaning behind the strangest designs.