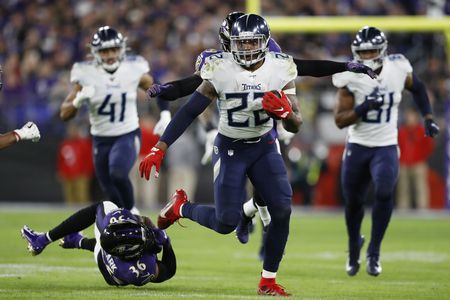 Derrick Henry rushing down the field after breaking a tackle.

Last Saturday, NFL fans were hit with a big shocker as the Baltimore Ravens, the number one team, was taken out by the Tennessee Titans. The Titans also took out the New England Patriots the prior week and have been putting on a show for the entire league.

The Ravens were a favorite to win the Super Bowl because of their second year quarterback, Lamar Jackson. The young QB broke several records this year, including Most Quarterback Rushing Yards, along with Most QB Rushing TDs. He also threw the most touchdowns this year and had the highest TD pass percentage.

Being the number one team in the league and the incredible stats Lamar has put up this year, everyone thought they would win their playoff game against the Wildcard Team. The Titans had a rough matchup last week, playing Tom Brady and the New England Patriots. Tennessee put up a good game and beat the Patriots, looking like a true underdog team. Now after taking out the number one team, the Titans really could be having a Cinderella run for the Lombardi.

Even though Derrick Henry ran through the Ravens, Lamar Jackson should keep his head held high because he is the most likely candidate for MVP, which is nothing to be ashamed of. We all have to wait and see where the Titans will end up and if Lamar wins his Most Valuable Player.