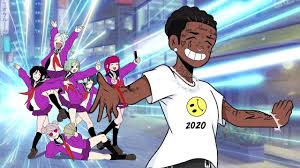 Last Friday, the famed artist known as Lil Uzi vert released his newest single “futsal shuffle 2020”. This was one of the few projects that have been released all year. At the beginning of the song, Uzi used a sample of Tyler the Creator (Fellow Artist) screaming to sing the song. It is believed he put this sample into hype up the intensity of the song. After the sample, Uzi tags his upcoming album “Eternal Atake ”, fans have been waiting for the release of this album for almost two years after a clip of a song got leaked from one of Uzi’s former producers. After the release of his fourth studio album “ Luv is 2 Rage”, Uzi posted on his Instagram that he is quitting rap, Uzi then follows up that post discussing his hatred for the industry, how it’s causing his depression. However, fans are used to Uzi’s unpredictable attitude and really did take his absence as a true hiatus. Sure enough, almost a year of speculation, Uzi makes his anticipated return to music with his hit single “Sanguine Paradise”. This single helped usher in Uzi’s re-entrance to the industry and really set up his comeback for 2020. Fans can’t wait to see what he does next.